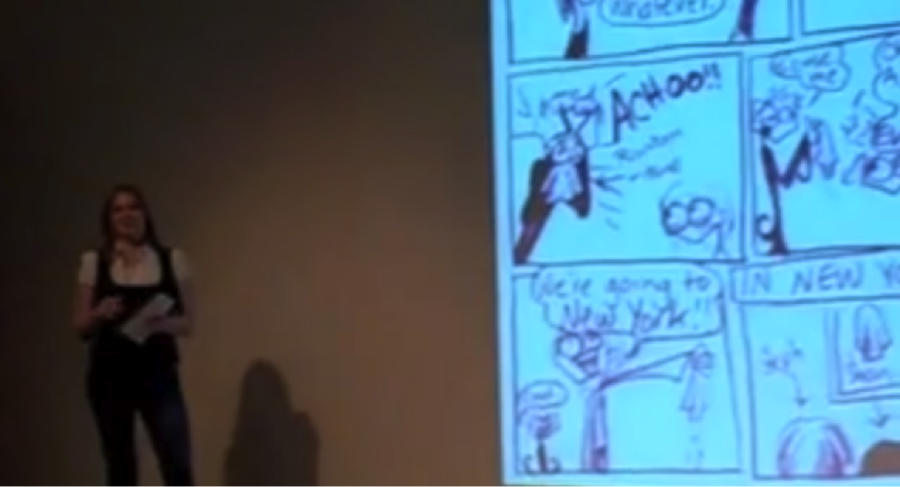 On the fourth day since I moved to Jacksonville, I sat in my car outside of a bar called Kickbacks and hyperventilated. I had relocated just months after the start of the recession to a place where I knew no one and had no job. But that night I was hoping to change that.

It was a “Cocktails & Creatives” event put on by AIGA Jacksonville (The Professional Association for Design), and I sucked down my fear long enough to go in there and meet some people. Among them was my future employer, Jeff, who instantly recognized my goofy smile from my self-promotional book, featuring a photo of me smiling goofily in the inside cover.

That night I also met Tiffany Manning and Kellie Osgood, who invited me to participate in a speaking event I couldn’t quite pronounce, but sounded fun enough to agree. The event was called Pecha Kucha (puh-cha-ch-kuh), and it was the Jacksonville chapter of a global event held in over 400 cities. Speakers are invited to share any subject they like, the only catch being they have to do so in 20 slides that last 20 minutes each. After more hyperventilating in the bathroom I gave a talk on my passion for drawing comics, having no idea that somewhere in the crowd was Jeff.

So months passed. I got my dream job (at HDco, if you’re wondering). And I was sad to hear that after a few more shows, Pecha Kucha Jacksonville had been discontinued. It wasn’t until at another Cocktails & Creatives event that I met Justice Kragiel, who shared a similar passion for reigniting this quirky little speaking event.

We teamed up with Tiffany Manning to bring Pecha Kucha to the 5 Points Theatre, where it thrived more than we could have ever hoped. Speakers were invited to talk about the history of Jacksonville, intimate photography projects, the Jacksonville roller derby girls, weird diets, adventures in the wilderness, adventures being shipwrecked, beards, beer. Biking, neuroscientists, robots, coupons, and art initiatives. 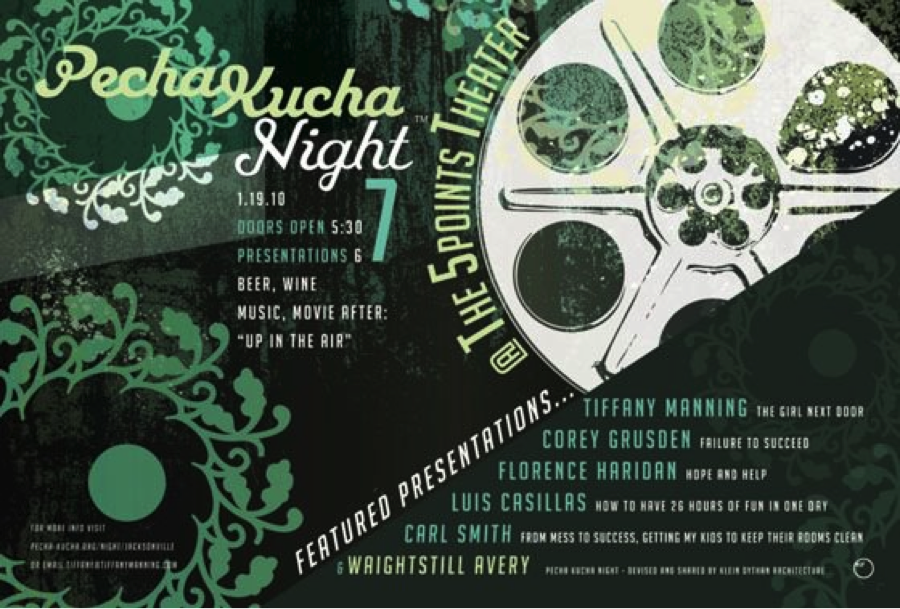 The first event we put on at the 5 Points Theatre was Pecha Kucha volume 7 on January 19, 2010. Just this week Pecha Kucha volume 17 was held at Intuition Ale Works. I just couldn’t have been more proud to say it was my tenth show, nor more confident in the future of this event. After two years being a coordinator and a lot of great times, I’m passing the torch to Tommy Hobin, who is a past presenter and expert people person.

When I think back to my Pecha Kucha presentation, when I opened with: “A lot of you may not know me because, well, I haven’t been around very long. This is my third week in town.” I think of all the things Pecha Kucha has given me. More courage to speak in public. The experience of planning my first event. A memorable introduction into a new community. A job that I love. Friends that I love. And the opportunity to meet new people.

The best part of this event was and is the people.

So this coming March, I encourage you to join me in the crowd for this delightfully strange event, and support Tommy as he ushers in a new era for Pecha Kucha Jacksonville. And if you have the courage to stop hyperventilating, maybe you’ll even participate in the show.


Let’s get your to-do list done and build some brand love.
Say Hello!